Duchess gave birth to very premature twins around 5 o’clock yesterday evening. The two together were about the size of one of last year’s lambs. They were huddled together in the straw when I found them, shivering and not making any effort to get up and nurse.

I knew as soon as I picked up the little white-headed ram that he was going to be my Snow Angel. He was tiny, badly underdeveloped, and seemed to have no muscle control. We kept him dry and warm, and tried to feed him a few drops of colostrum replacer at intervals, but he stayed limp and unresponsive. He wouldn’t suck, either wouldn’t or couldn’t move his legs, and only made a few brief attempts to raise his head before he died around 9 pm last night.

The ewe lamb didn’t look promising either at first, but she was larger than her twin and did kick a bit when picked up. After a while of being wrapped up and having colostrum (antibody-rich first milk a lamb has to have in their first 12-24 hours) fed to her through a syringe, she suddenly started thrashing and loudly crying that this new world she’d entered most certainly did not meet her expectations. That gave me hope, since a lamb that wants to live has a much better chance of doing so, even against long odds. I set her on the floor, and after a few false starts she staggered to her feet. Her hooves were still very soft, so I hadn’t expected her to be able to stand.

I gave her back to Duchess (the whole family had migrated to the basement) and while Duchess was happy to lick her, she wouldn’t let the baby nurse. I thought maybe her udder was engorged and painful, sometimes that can make a ewe reluctant to let a lamb nurse, but when I tried to milk her out I discovered she had no milk. Her udder was starting to develop, but her teats were small and empty.

The little ewe lamb was determined to nurse and kept chasing Duchess in circles around the pen crying, until Duchess decided that she didn’t want the lamb at all. Joy. Back to replacement colostrum.

Once she got the hang of it, Baby started trying to suck on everything she could reach. She tried to suck on the towel she was wrapped in. She sucked my fingers. She was particularly insistent that my chin ought to produce milk. She even tried to suck on the wall when she ran into it chasing Duchess. My favorite professor in college used to say that a lamb was healthy by saying “it’ll jump up and suck the fencepost.” I always thought that was hyperbole, but apparently it wasn’t. 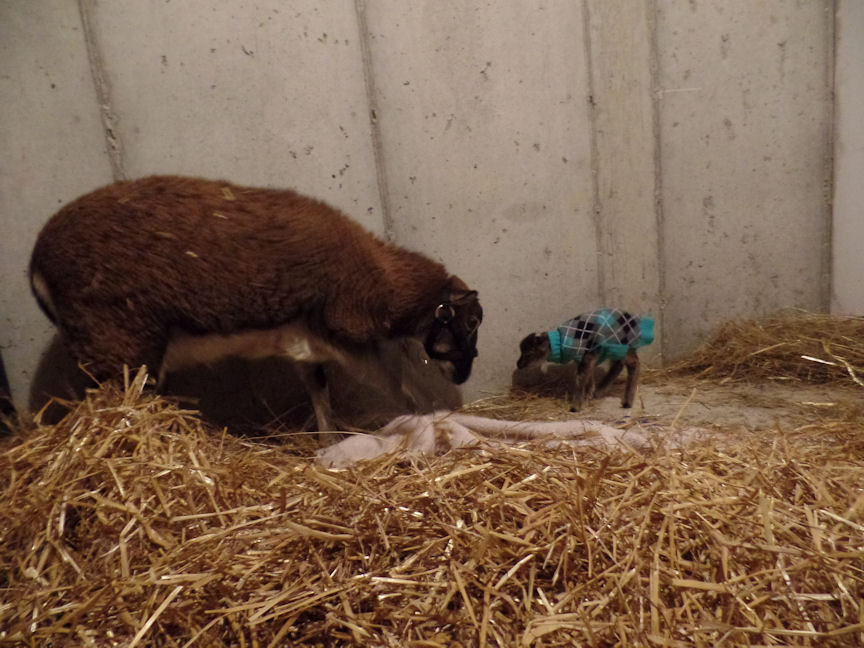 Just about the time that Duchess decided maybe she did want that lamb after all, Baby decided she was having much better luck with me than with Duchess, and responded to all further attempts to reunite them by running back to me and sucking on my jeans while crying.

Eventually all this staggering around crying and sucking on things wore her out, and she crawled into my lap for a nap.

And aside from a few bathroom breaks and an hour or so with my mom while I took a nap myself, she’s been there ever since. She mostly sleeps, and occasionally wakes up and cries for milk. I’ve almost convinced her that yes, she does have to drink from the bottle because no, my chin does not produce milk. I’m not sure why she’s so fixated on my chin.

I’m worn out, half sick, I have lamb slobber all over my face and various types of lamb excrement all over my clothes, but I have a live little ewe lamb, and I’d say that makes her a Miracle. We’ll probably call her Mira for short.

11 thoughts on “Miracle and Angel”